by Matt Sailor
Prev NEXT
5 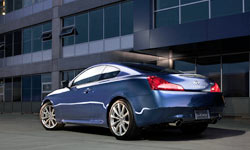 This sporty Infiniti was one of the few luxury coupes to make the 2010 most stolen list.
Nissan

This sporty Infiniti was one of the few luxury coupes to make the 2010 most stolen list. With luxury car manufacturers touting the advanced anti-theft systems of their cars, it seems that cars like the Infiniti, which has a state-of-the-art vehicle immobilizer system, wouldn't be as vulnerable. The Infiniti's anti-theft system involves a transponder chip inside the electronic key that won't allow the engine to start if the right key isn't in the ignition [source: Infiniti]. But seasoned thieves have ways of getting around even the most advanced anti-theft systems. They often go as far as casing a house or a dealership, and breaking in and stealing the keys from the owners [source: Statistics Canada]. For every 1,000 insured Infiniti G37s, 7.1 were stolen in 2010 [source: Highway Loss Data Institute].