by Matt Sailor
Prev NEXT
7 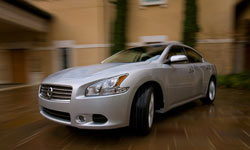 The most coveted parts of the Maxima are the high-intensity headlights that come standard on the car.
Nissan

Wedged in among the huge luxury SUVs and trucks, this midsize sedan might seem like a modest addition to the most stolen list. But insurance claims for theft were filed for 6.5 out of every 1,000 Maximas in 2010 [source: CNN Money]. The most coveted part of the Maxima is a type of high-intensity discharge headlight that comes standard on the car [source: Motor Trend]. Thieves who end up taking apart cars and selling the pieces can make good money selling those expensive lights, which can be installed on older model Nissans. The headlights are found on other cars, as well, but it seems the Maxima's headlights are most appealing to thieves because of their compatibility with older model Maximas, which makes them easier to sell. Since Nissan started including those headlights on the Maxima in 2002, theft claims have continued to rise for the model [source: Motor Trend].