by Matt Sailor
Prev NEXT
4 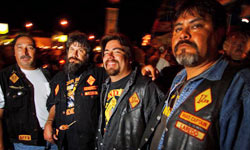 In terms of membership alone, the Bandidos Motorcycle Club is one of the largest outlaw motorcycle gangs. The group has risen to a total of 2,000 members since it was started in 1966 [source: National Gang Intelligence Center]. Add to that a number of puppet clubs or "duck clubs" that do the Bandidos bidding and take the heat for some of their illegal activity, and you have a huge organization. The gang is powerful enough, with chapters in 16 states and at least 14 countries, that U.S. law enforcement officials have labeled it one of the Big Four OMGs [source: National Gang Intelligence Center].

The Bandidos name and logo come from the Frito Bandito, the mascot for the popular brand of corn chips [source: O'Hare]. But don't let that whimsical association fool you. Based out of Texas and controlling turf across much of the Southwest, the Bandidos are heavily involved in cross-border drug trafficking [source: National Gang Intelligence Center]. They also have been involved in violent turf wars all over the world. This fierce warfare with rival gangs has led to bombings via grenade in Norway, arson in Brisbane, Australia, and multiple shootings in Canada [source: Skelton].