by Matt Sailor
Prev NEXT
9 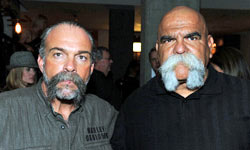 It might be named after Genghis Khan's mighty empire, but the Mongols, formed in the late 1960s in East L.A., is a relatively small club. It has 70 chapters in the United States, and 800 members, most of whom are California-local [source: National Gang Intelligence Center]. But, while it may not be one of the Big Four outlaw motorcycle gangs -- the four largest and most powerful biker gangs, as identified by United States law enforcement agencies -- the Mongols has made up for its lack of size with violence and ferocity. (Keep reading the list to find out who the Big Four are.) Despite being only a quarter of the size, the Mongols successfully wrested control of Southern California from its rivals, the Hells Angels, in the 1980s, after a protracted gang war. The Hells Angels still hasn't taken back the territory [source: National Gang Intelligence Center]. The Mongols' success in controlling the turf is due largely to their alliance with L.A.'s Hispanic street gangs. That alliance has also resulted in the Mongols engaging in racially motivated violence against African-American gang members, and even black civilians not affiliated with any type of gang. The Bureau of Alcohol, Tobacco and Firearms considers the Mongols the single "most violent and dangerous OMG" [source: National Gang Intelligence Center]. In 2008, 61 of the gang's members were indicted in a huge bust, for charges including drug trafficking, racketeering and murder in L.A., Las Vegas and other parts of the Southwest [source: Goldman].