by Patrick E. George
Prev NEXT
5 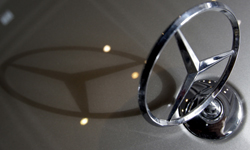 Karl Benz invented the gasoline-powered automobile, and since then, Mercedes-Benz has always been known as a company at the pinnacle of engineering. This has been true throughout its long history, and it has led the company to produce some truly stunning cars.

The 540K Special Roadster was no exception. The 17-foot-long (5.2-meter), two-seat convertible features classic pre-war styling including swooping fenders, big headlights and a tire mounted on the trunk. It was massive and it was exclusive -- just 26 Special Roadsters were built, intended only for Europe's political and financial elite. The 540K featured a 5.4-liter straight-eight cylinder engine with 180 horsepower, thanks to its Roots-type supercharger -- hence the K, which stands for "Kompressor" [source: RM Auctions].

This car was owned by an Englishman who bought it in 1937, then managed to squirrel it away during the war. Driving such an ostentatious German car probably wouldn't have gone over too well with the neighbors, right? The car went through several owners, the last one being Formula 1 chief Bernie Ecclestone, until it was sold at auction for $8.2 million.