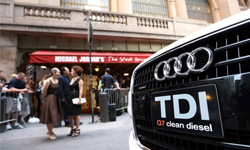 We've talked a lot about gasoline engines so far, but what about diesel engines? Diesels have never been big sellers in the United States. Despite their superior fuel economy over similar gas engines, many Americans still think of diesels as the noisy, sooty, smelly, unreliable motors of the 1970s and 1980s.

That's not the case anymore. The modern diesel engine is powerful, clean and extremely fuel-efficient. Today's engines use a low-sulfur form of diesel fuel, and systems within the car help eliminate particle matter and excess pollution.

The diesels made by companies like Volkswagen, Mercedes-Benz, BMW, Volvo and others boast engine improvements like turbocharging, sophisticated fuel injection, and computer control to provide a driving experience that's both efficient and high in torque [source: Bosch].

Diesel engines have some drawbacks, mainly their low RPM level and the higher cost of diesel fuel. But since many of them can achieve well over 40 miles per gallon (17 kilometers per liter) on the highway, the driver will need to pay for that fuel a lot less often. And if you're wondering if modern diesels offer good performance, look no further than the last few 24 Hours of Le Mans races, where Audi has dominated using a diesel racecar.

Finally, we'll look at the current leader in "green" cars -- the hybrid engine.