by Patrick E. George
Prev NEXT
8 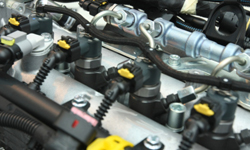 Why did fuel injection replace the carburetor?
iStockphoto/Thinkstock

Since the late 1980s, carburetors have been almost completely replaced by fuel injection, a far more sophisticated and effective system of mixing fuel and air. Fuel injectors spray gasoline into the air intake manifold, where fuel and air mix together into a fine mist. That mix is brought into the combustion chamber by valves on each cylinder during the intake process. The engine's on-board computer controls the fuel injection process.

So why did fuel injection replace the carburetor? To put it simply, fuel injection just works better in every aspect. Computer-controlled fuel-injected engines are easier to start, especially on cold days, when carburetors could make things tricky. Engines with fuel injection are also more efficient and more responsive to changes in the throttle [source: Automedia].

They do have drawbacks in terms of their increased complexity. Fuel injection systems are more costly to repair than carburetors as well. However, they have become the industry standard for fuel delivery, and it doesn't look like carburetors will be making a comeback anytime soon.

In this next section, we'll discuss the next step in fuel injection technology known as direct injection.