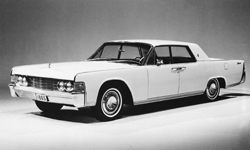 While lowrider 1950s trucks may be short on interior comforts, Lincoln Continental lowriders have luxury to spare.

If a lowrider really wants to show the world what he or she's got, the car of choice is the Lincoln Continental, especially models from the third and fourth generations of the car, which ran through the 1960s and 1970s.

The first thing that strikes you about the Lincoln Continental is its size. This is one gigantic car. At the front end of the Lincoln is a pugnacious upright grille, which most lowriders coat in gleaming chrome. Heading back from the grille is a stretched hood, then a huge passenger compartment with four doors (the back doors open to the rear), but no middle pillar. The rear deck is also extremely long -- long enough to make you think the Continental would be a great choice for mobsters.

Lowriders like the Continental because its huge size makes an immediate statement, and its interior is roomy and comfortable enough for extended cruises. When you get the Continental lowered, it looks even longer. The only adornment on the body tends to be the car's grille, which means that blingy rims stand out. Given the Continental's size, some lowriders chose to go with more subdued paint colors and add interest through pinstriping, while others go with the wild colors lowriders are known for, making sure their Continental creates an immediate impact on everyone who sees it.