by Jamie Page Deaton
Prev NEXT
6 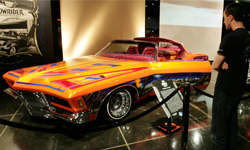 For lowriders who like the Impala's looks, but want something a little different, maybe a little more upscale, there's the Buick Riviera. The Riviera first gained notoriety for the fact that it was lighter than most Buicks, yet had the same amount of power. That made it an excellent performer -- though that's not exactly what most lowriders were after.

The Buick Riviera was marketed as a luxury car, and that made it appealing as a status symbol for lowriders cruising the strip. While the first generations of the Riviera were fairly conventional, Rivieras in the 1970s had a boat tail, which combined angled rear glass and a sloping bulge of sheet metal (that looks like the bottom of a boat) into a sleek and distinctive rear end.

The Riviera already had a pretty cushy interior, so all lowriders had to do was add some style through custom sound systems, fabrics and other stylistic touches.