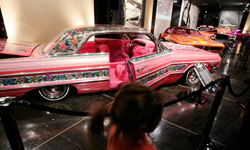 You simply can't talk about lowriders without mentioning the Chevy Impala. The Impala has been in production since 1958 (although there was about a 10-year break in the late '80s and early '90s). Because the Impala was a popular car in the '50s, '60s and '70s, there are still plenty available for customization, and the Impala (especially models from the 1960s) is seen by some as the quintessential lowrider.

In contrast to the curvaceous 1940s and '50s lowriders, the Impala is relatively angular and squared off. The Impala came as both a coupe and a convertible, allowing for more individuality among lowriders since there were more body styles to choose from. Plus, since lowriding is concentrated mainly in Southern California and the Southwestern United States, who wouldn't want a tight convertible to cruise in?

Typically, lowriders will leave Impala sheet metal alone, opting instead to show off the car's lines using bright colors and lots of metallic or pearlescent paint. More effort goes into the suspension. The Impala is a rugged car, so it's a good candidate for dancing -- that's where the suspension is fitted with air bags or a hydraulic system that allows the car to hop and jump off the ground.