by Jamie Page Deaton
Prev NEXT
8 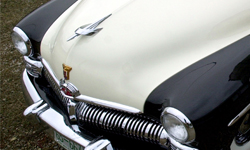 Of course, lowriders aren't confined to just Fords and Chevys, even when the style started becoming more mainstream. With ingenuity and a sense of style, any car can become a lowrider. And as time passed, lowriders started tricking out classic cars. In the 1970s and 1980s, classics from the '50s became a popular lowriding trend.

The 1950 Mercury Eight is known as a lowriding car mainly because well-known lowrider Steve Gonzales showed his around southern California. The 1950 Mercury Eight makes a smooth lowrider, thanks to wheel flares that extend from the car's front fenders all the way to the doors, creating a sleek and somewhat fast profile.

The Mercury Eight's grille isn't as prominent as some other 1940s and '50s lowriders', but it's fairly intricate, so when it's fully chromed and polished, it makes quite a statement. Inside, the Mercury Eight has a large and luxurious interior, which is perfect for lowriders looking to add custom fabrics to create lavish interiors for cruising.