by Scott C. Benjamin
Prev NEXT
7 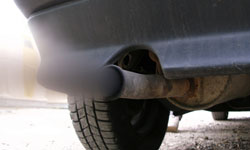 Can we really make a tailpipe that captures carbon dioxide?
Matteo69/iStockphoto

­­How long has it been since a tailpipe design has been able to raise a few eyebrows in the auto industry? Has it been years? Decades? Perhaps never? While the average tailpipe on a car or truck is obviously nothing new, the added function of this particular exhaust system component sets it apart from the crowd.

It's probably a safe bet that you've heard that carbon dioxide (CO2) emissions are a growing threat to the Earth's atmosphere. Smog is an ever-present condition over many cities worldwide. It's bad for the environment and bad for the health of the people and animals that are exposed to it on a routine basis. Most everyone agrees that something has to be done. Researchers and scientists are constantly attempting to find new and effective methods to reduce the greenhouse gases that we continue to produce by way of automobiles, factories and other fossil fuel-powered machines. But is the answer as simple as trapping the offending gases? Has a team of researchers from the Georgia Institute of Technology really found a way to prevent CO2 from ever entering the atmosphere?

We wondered the same thing when we asked: Can we make tailpipes that capture CO2?

Maybe you subscribe to the viewpoint that electric cars are the solution to pollution? If that's the case, then you'll be intrigued by the topic that we ranked as number 6 on our list.