by Scott C. Benjamin
Prev NEXT
10 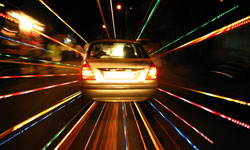 What will speed in the future look like?
Nikhil Gangavane/Dreamstime

­­It's no secret -- people love speed. If you don't agree, then just take one look at the packed stands at any racetrack around the country (or around the world, for that matter) and you'll find true-blue race fans that simply can't get enough. There's something almost intoxicating about speed that drives us to push harder and harder to go faster and faster. Whether it's shaving a fraction of a second off of an elapsed time at the local drag strip or attempting to break the land speed record on the Bonneville Salt Flats in Utah, pushing the upper limits of man and machine is what it's all about. Around the world you'll find kids laboring over homemade go-karts to make them go just a little faster; grown men and women buying expensive high-performance parts from the local speed shop to achieve the same results (just on a slightly larger scale); some people even trick-out their lawnmowers so that they'll move at speeds that far exceed highway speed limits. To put it in simple terms, speed is addictive.

But what we want to know is just how far can we go with this obsession? That's why we asked the question: What will speed mean in the future?

Speed may be alluring, but there are plenty of other auto-related questions that we had in 2008. Keep reading to find out what we ranked as number 9 on our list.