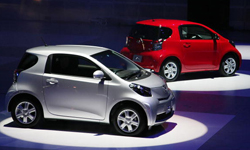 Toyota Motor Corporation's compact car 'iQ' is on display during an event at Makuhari Messe on Oct. 15, 2008 in Chiba, Japan.
Junko Kimura/Getty Images

To keep average global temperatures from going much higher and causing civilization-threatening weather, the countries of Europe are demanding more stringent emissions requirements of automakers for their fleets.

Where does that leave luxury sports car makers like Aston Martin? One possibility is that it prompts them to form unusual alliances, like the one they entered into with Toyota to re-brand the Toyota iQ as the Aston Martin Cygnet.

OK, let's back up -- what's a Toyota iQ? It's a quirky little pod of a car meant to move a person or three around a city with little fuss -- and little flash. Its tiny size means it's easy to park. As a "city car," it's similar in size and concept (hmm, and even name) to the Smart Fortwo.

Not only will Toyota also build the iQ microcar for the U.S. market as a Scion (whose buyers already like small, quirkily practical vehicles), but it has licensed the platform to Aston Martin to sell in Europe as the "Cygnet." Aston Martin, the brand popularized by Her Majesty's favorite blunt instrument of diplomacy, Agent 007, will give the iQ, ahem, Cygnet, its own signature look and slap on an additional $34,000 or so to the $16,000 sticker price.

Like the rest of the cars on our list, the iQ began life as a concept vehicle. It first appeared in public at the 2007 Frankfurt Motor Show.

Back when the term "think outside the box" actually meant something, the next car on our list took the directive literally. Continue to the next page to learn what it is.