by Akweli Parker
Prev NEXT
7 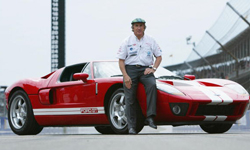 With all the good car names taken, sometimes a manufacturer would rather just rely on the aura of a known brand rather than make up a faux-Latin name that makes people scratch their heads and say, "huh?" On the previous page, you read about some of them.

One more to add to the list is the Ford GT. Also a concept at the time of its unveiling (2004 Detroit Auto Show), the GT evoked the memory of Ford's GT40 race car of the 1960s. Primarily due to licensing issues, Ford abandoned thoughts of reviving the full GT40 name and instead just called it the GT.

The timelessly classic lines don't give much of a clue as to the modern GT's advanced technology. Among other new features on the modern GT were an aluminum engine, aluminum spaceframe and modern, computerized fuel injection [source: Ford].

One area that does ring authentic to the past is the 550-horsepower GT's fuel economy -- it gets a ghastly 14 miles to the gallon (6 kilometers to the liter) in combined city and highway driving.

With cars, beauty and speed always come at a price. But as our next concept-turned-consumer good shows, the price doesn't always have to be fuel efficiency. Go to the next page to see a green speed demon that you can own, if you have enough green.