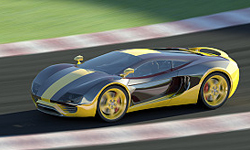 Ever since legendary automotive designer Harley Earl created what was arguably the first concept car in 1938, the public has been enthralled to witness the ever-expanding limits of technology combined with auto designers' unrestricted imaginations.

Traditionally, concept cars were usually extreme flights of fancy. With exaggerated bodywork and wildly impractical technology (on-board nuclear generator, anyone?), concept cars of the past boldly tossed reason out the window while pointing the way to a more fun motoring future.

The public almost came to expect that concepts -- shown by automakers at trade shows and other events to gauge opinion and guide it -- would either never make it to mass production or would be so watered down as to be unrecognizable when introduced for sale.

But sometimes concepts actually do make it to production. And there's a general historic trend that automakers gravitate toward making more "conservative" concepts that they can easily adapt into sellable cars during bad economies. In that spirit, we present to you these 10 concept car success stories.

For the No. 10 car on our list, continue to the next page.