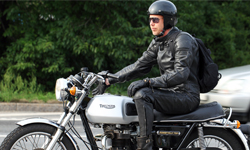 Classic bikes look cool, but they can be temperamental – too temperamental for a lot of beginners. You have to deal with finicky transmissions, unreliable engines, complicated starting systems and stiff suspensions – not to mention that older bikes aren't going to have features like anti-lock brakes to help you avoid an accident. When it comes to motorcycle ownership for new riders, you don't necessarily need a new bike, but you don't want one that's too old and troublesome, either.

This sounds like a job for the Triumph Bonneville. It has classic café racer styling, without classic café racer reliability and safety issues. At 495 pounds (224 kilograms), the Bonneville is a bit bigger than most other bikes on this list [source: Triumph]. However, it gets 57 miles per gallon (24.23 kilometers per liter) on the highway and makes 68 brake horsepower — well within the range of what most beginners can handle. Anti-lock brakes also help make the Bonneville safer than older bikes with the same look. As Complex says, the Bonneville, "It provides all the basics, which is so important for beginners.

For some people, a Harley is the entire reason they want to learn how to ride. Unfortunately for those people, the Harley they've been lusting after is probably too overwhelming right off the bat. While a Buell Blast is a great sport bike for aspiring Harley owners, some new riders just can't wait.

That's where the Sportster comes in. Harley's smallest model family, the Sportster clan has had a number of members, but the 883 is the one considered best for beginners. With a 25.7-inch (65.3 centimeters) seat height, the Sportster 883 isn't too far off the ground, which makes balancing and standing at a stoplight easier. Its engine is fuel-injected and air-cooled, and it also makes 53.8 pound-feet (72.9 newton meter) of torque while getting 51 miles per gallon (21.68 kilometers per liter) [source: Harley Davidson]. Ask Men notes that the Sportster has relatively little power for a Harley, which makes it a great hog to get some cruising miles on. It's also lighter and more maneuverable than most other Harleys, as well as less expensive.

The Kawasaki Ninja was all over the first generation of "Grand Theft Auto," and while we don't recommend it for going on a crime spree, it is a great beginner's bike. As Adventure Seeker says, "In terms of entry-level sports bikes, this is it ... If you're looking to ride sports-style motorcycles in the future, this is the perfect starter bike." Jalopnik also calls it the "quintessential first bike," because it's so easy to find and easy to ride.

The 2015 Ninja has available anti-lock brakes and weighs just under 384 pounds (174 kilograms) [source: Kawasaki]. A 296 two-cylinder engine provides power, and a new Ninja starts under $6,000 (under $5,000 if you pass on the anti-lock brakes, which we don't recommend — $1,000 is a small price to pay for an extra measure of safety). Not only is the Ninja affordable at the dealership, but it gets up to 66 miles per gallon, so you won't go broke fueling it up. The one downside of the 2015 Kawasaki Ninja? It's only available in two colors.

Yamaha makes a number of good bikes for beginners (yours truly learned on a Yamaha SR400), and the FZ6R is one of the best Yamaha bikes available for new riders. While some good beginner motorcycles look a little stripped down, the Yamaha FZ6R has full-on sport bike styling that makes it at least look fast and powerful, even if your skills can't quite handle the most powerful sport bikes yet.

The Yamaha FZ6R has a low seat at just 30.9 inches (78.5 centimeters) from the ground and an efficient fuel-injected single-cylinder engine that gets up to 43 miles per gallon (18.28 kilometers per liter) [source: Yamaha]. It has a six-speed transmission. While the FZ6R is a little heavier than other bikes on this list with a wet weight of 470 pounds (213 kilograms), it has a secret weapon: Its seat is adjustable, making it semi-customizable for you and a lot easier to ride than a bike with a seat that doesn't adjust. At 600 cc's, the FZ6R is powerful enough to keep up with you as your skills develop.