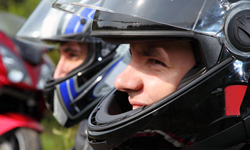 When you first become a biker, slow it down. No need to hit the road with a top of the line motorcycle just yet.
Pavel Losevsky/Thinkstock

It's a scientific fact (seriously, where's my Nobel Prize for discovering this?) that you'll never look cooler than you do when you sit on a motorcycle. This was verified by Marlon Brando, James Dean, Dennis Hopper and Arnold Schwarzenegger. In addition to making you look bad to the bone, riding a motorcycle gives you a visceral connection to the road. That translates into plenty of thrills. Beyond the inherent "badassery" that comes from riding a motorcycle, it can also be an economical way to get around.

But it does require some skills and they can take time to develop fully. While you can get a motorcycle license by taking a weekend class in most states, that doesn't mean you're ready to mount a full-size bagger or super-fast sport bike. Starting off with a beginner motorcycle can be a great way to safely grow your motorcycle riding skills. Here are ten great bikes for new riders.

People who really know what they're talking about agree that the Honda CB300F checks all the boxes for a great beginner motorcycle. It's affordable to buy and own, easy to ride and doesn't have so much power that it will overwhelm a beginner.

The CB300F is a lightweight bike with a single cylinder, fuel-injected engine. For someone just getting into motorcycle riding, that makes the CB300F easy to live with on a day-to-day basis. Beyond its light weight and just-powerful-enough engine, the CB300F has a slightly upright riding position that makes balancing easy. At under 350 pounds (158 kilograms) and a seat height of just under 31 inches (78.74 centimeters), the CB300F shouldn't be all that punishing for most people to ride [source: Honda]. Plus, Honda says the CB300F gets up to 71 miles per gallon (30.18 kilometers per liter), which will make getting plenty of riding time an affordable proposition. All-things-motoring website Jalopnik even went so far as to call the CB300F "the best first motorcycle ever," which is a compliment that's tough to beat.

Harley-Davidson is a storied motorcycle brand best known for their big baggers, cruising bikes and leather-clad image. But most Harley-Davidson bikes are too big and powerful for most beginner riders. What's a new biker who wants to ride some of the best American iron out there to do?

If only a Harley will do and you're a newbie, check out the Buell Blast. Plenty of Harley-Davidson riders took their first riding course at a Harley dealership, which means many of them got their start on a Buell Blast. Buell was a subsidiary of Harley-Davidson. Last made in 2009, the Buell Blast is a pretty easy used bike to find, and being used means that the Blast is a pretty affordable way to get into riding. The Blast weighs in at just 360 pounds (163.3 kilograms) and has two available seat heights: 27.5 inches (69.9 centimeters) and 25.5 inches (64.8 centimeters). This means you can be vertically challenged and still ride it [source: Popular Mechanics]. When it was new in 2001, Popular Mechanics said, "For tooling around town, keeping up with traffic on the highway and getting the basics of motorcycling under your belt, the Blast shines."

The Suzuki SV650 makes this list as a beginner's motorcycle that you're not likely to outgrow any time soon. See, most experts recommend that beginning riders don't go for a bike that's too powerful because all that power can be tough to handle for a newbie. The problem is, once a beginner gets their wheels under them, so to speak, that starter bike starts to feel a little pokey. Enter the SV650. Best Beginner Motorcycles said that the SV650 exists in that Goldilocks zone of not having an overwhelming amount of power for a beginner, but having enough to keep an intermediate rider interested.

Powered by a 645 cc V-twin fuel-injected engine, the Suzuki SV650 makes 70 horsepower and gets between 50 and 55 mpg (21.3 and 23.4 kilometers per liter) [source: Best Beginner Motorcycles]. Another thing the SV650 has going for it is the variety of farings it offers. Farings are additional parts to alter your motorcycle's looks and improve aerodynamics. In the case of the SV650, you can get it with no farings (sometimes called naked) or with farings shrouding pretty much everything from the headlight back over the engine, which gives it more of a sport bike look.